I've mentioned before that I think barbecue and eggs make a great breakfast combination. On Sunday I enjoyed some beef brisket with my breakfast during brunch at Three Angels Diner on Broad. My wife and I frequently have brunch together at Three Angels but on this occasion I was meeting up with Ken who writes the always-interesting Ken's Food Find blog.

Ken's blog covers a wide variety of local restaurants. My favorite posts by him are when he points me to previously unknown to me places like Salaama Market & Restaurant, which is a great find in an area where I frequently work, or Roxie's Grocery, which I still haven't made it to yet. Based on his blog I wasn't surprised when he turned out be a great guy to hang out with in person. 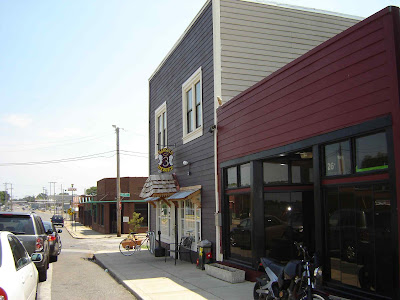 The Three Angels building recently received a nice facelift. The restaurant has been a major part of Broad Avenue's revitalization. You can see a picture of what the front of the building looked like until recently in this review from the Best Memphis Burger blog.

If I'm not ordering from the brunch menu my standard order at Three Angels is the Colossus Burger; the cheeseburger that singlehandedly inspired the Best Memphis Burger blog. I've tried several other items on the menu but that burger is consistently the most satisfying thing on the regular menu to me, although the meatloaf does come close and my wife is a devoted fan of the place's fried chicken. Three Angels has a great rotating list of daily vegetable sides so I always pay up to get one of the them instead the chips that normally come with the Colossus. The restaurant's Facebook page is usually the best place to find out what the available vegetables are on any given day. 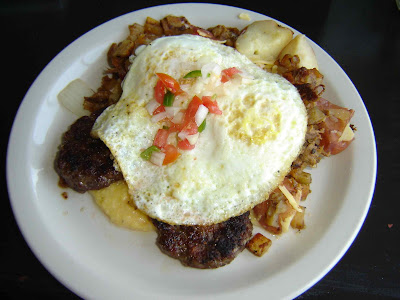 During brunch I always order the Kitchen Sink; a glorious combination of beef brisket,  homemade sausage, bacon, garlic cheese grits, potatoes and cheese that is topped with two fried eggs and salsa. For $11 it is easily the best value on the brunch menu. Another standard order for me at Three Angels is Peroni, an Italian beer that is available on draft there. I had one with my brunch Sunday, like I do pretty much anytime I'm in the restaurant. If my wife had been able to accompany us I can guarantee she would have ordered one of the place's excellently refreshing blueberry mojitos. 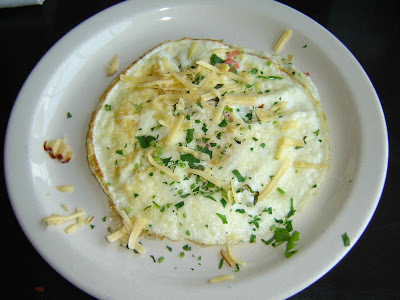 Ken order the frittata, which I have always shied away from since it is made with egg whites instead of whole eggs. I don't understand why someone would throw away the majority of an egg's vitamins and minerals, which are concentrated in the yolk as Underground Wellness blogger/podcaster Sean Croxton explains here. But nutrition aside, the frittata ended up looking delicious when it came out. It is definitley less food than the Kitchen Sink. Ken ended up ordering a side a biscuits to go with it. He quickly declared that they were some of the best biscuits he's ever had. And the jam that came with them appeared to be homemade. It's details like that that elevate Three Angels above the realm of your average diner food. 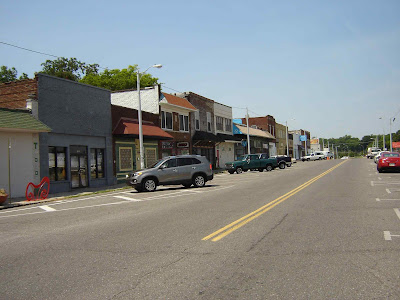 The ongoing revitalization of Broad Avenue around Three Angels has been amazing to watch over the past several years. At one time Sam Cooper Boulevard fed directly onto Broad, bringing a steady stream of potential customers past the street's businesses. My dad worked for roughly 20 years repairing TVs, VCRs, stereos and other electronics at the Sears service center that used to be located on Broad in what is now Hollywood Feed. When the city expanded Sam Cooper to bypass Broad in 2001 it caused most of the then-existing businesses to close in response to the suddenly greatly reduced traffic.

A lot of people in the suburbs of Memphis seem to enjoy derisively comparing the city to Detroit, but that comparison is lazy, untruthful and obviously rooted in racism. People who make the comparison will note that Memphis and Detroit both have large black populations and have both experienced blight caused by suburban sprawl. But Memphis has also experienced a steady revitalization of its older historic neighborhoods. Memphis has been a distribution hub since the early days of steamboats and railroads where the Detroit area tethered its entire economy to the American automotive industry.

The sprawl that eventually crippled Detroit has been going on for nearly a century and was largely led by a steady abandoning of old factories as automobile manufacturers modernized, consolidated and lost ground to foreign competition. The book FORD: the Men and the Machine by Robert Lacey details how big of an improvement it was for the company when it moved its automotive  manufacturing from the old Highland Park Ford Plant to its new River Rouge Plant in nearby Dearborn during the late 1920s. The problem for the city was that in the following decades there was a steady cycle of manufacturers abandoning old plants to move into new ones.

A couple years ago Hot Rod Magazine did an article full of photographs of some of the massive old automotive plants rotting away around Detroit. Many of them were shut down in the 20s and 30s and replaced by plants that were then shut down themselves when they became obsolete in the 50s and 60s. Many of the old plants were for brands like Hudson, Packard, Rambler and Nash that don't even exist anymore.

The Detroit workforce moved outward in pursuit of jobs at newer factories while companies like Toyota, Nissan and Honda steadily chipped away at Michigan's former dominance of the market. The result was a city full of not just abandoned homes, but also a staggering amount of abandoned, outdated and decaying manufacturing sites with no demand to justify their existence.

Meanwhile, Memphis has seen steady revitalization in older areas like Cooper-young, South Main, Vollentine-Evergreen and the Binghampton area that Broad Avenue occupies. The extension of Sam Cooper required the bulldozing of a street that used to be an open-air drug market where suburban high school kids like me would drive to when we couldn't score weed from our fellow classmates.

Anyone who is foolish and/or naive enough to think that marijuana prohibition helps keep young people safe should have seen the old dope track that was just south of Broad back in the 90s. You pulled up, told someone what you wanted, gave them money and then waited for someone else to bring you a bag of what you hoped was the same thing you asked for. It was let-the-buyer-beware because if there was a problem with content, quantity or quality there sure as hell wasn't anyway to complain or ask for a refund.

The most fascinating thing about the current revitalization of Broad is that it wasn't caused by large government grants or the city making a priority out of it.  When Strong Towns director Chuck Marohn visited Memphis he referred to Broad Avenue as a perfect example of guerilla redevelopment. It wasn't revitalized through any type of high-dollar government initiative. Instead, local artists recognized the streets potential and began buying up buildings to create studios.

Because so many of Broad Avenue's revitalization pioneers are property owners there they don't have to worry about being victim's of the area's newfound success. Oftentimes when an area is turned around by enterprising artists and entrepreneurs who clean things up and make it a hip place to hang out those same people are later chased off by dramatically increased rents.

This blog spends a lot of time talking about good and bad urban design. Broad has a lot of buildings lined up side-by-side next to the street to create an environment that encourages people to walk around. These are the qualities created the street's potential for renewal. About two years ago the businesses there decided to take things a step further and repainted the road to reduce it from two lanes to four in order to create on-street parking and bicycle lanes. The restriping wasn't done by the city and was done according to the wants and needs of the local community instead of city and county codes. The results have been so successful I can't imagine any bureaucrat trying to undo the changes now. For years people were concerned that not enough people drove past the businesses on Broad. Now people specifically to the street to get out and walk around. 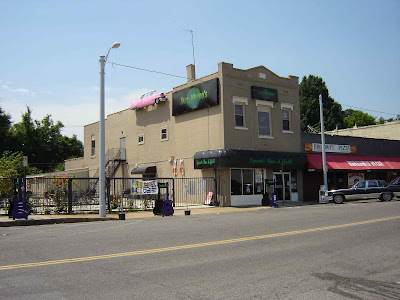 I've always used locally-owned Town & Country Locksmith, Inc., for all my locksmith needs. As someone who is constantly messing with classic cars I need old lock cylinders and ignition switches re-keyed more than the average person. Town and Country moved a couple blocks north to Summer Avenue when the loss of traffic from the rerouting of Sam Cooper Boulevard caused it to lose a lot of business. Now the old building is home to Jack Magoo's Sports Bar and Grill. I love being able to drink a beer and catch a basketball game at a building I remember visiting as a teenager. The place has been successful enough that it recently added a large outdoor seating area. A gearhead friend of mine, local artist Shawn Young of Kingfish Metal Works, is responsible for the classic Cadillac on the side of the building. The building next door is Broadway Pizza, which has been in the same spot for decades as the street has transitioned from success to decline to its subsequent revitalization.