I had heard people claim that Alex's Tavern serves outstanding ribs but I always just associated the place with late-night drinking and extraordinary cheeseburgers. I live right off of Jackson Avenue near Rhodes College. Alex's is 1.2 miles from my front door. This can be handy yet dangerous at the same time. For those who are unfamiliar with the place, Alex's is one of those special Memphis bars you head to when the other bars start closing in the early a.m. hours. In this city, plenty of great stories start with the words, "We ended up going to Alex's last night after last call at (fill in the blank)." However, I doubt anyone has ever said the words, "Man, going to Alex's on the way home last night was a really good idea." 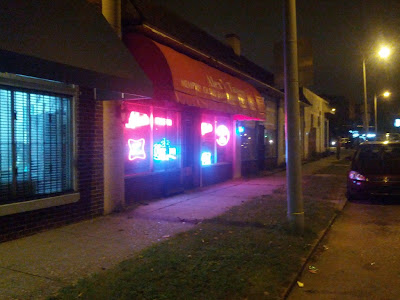 This is how Alex's looks when most customers see it. I stopped by on the way home after the P and H closed on Saturday night/Sunday morning just to bookend the day with Alex's visits. 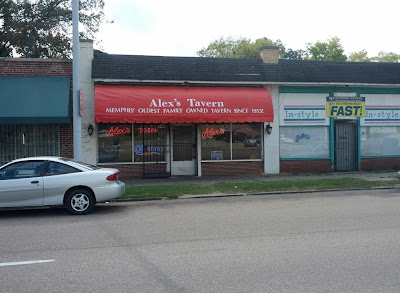 I had started my day there with an order of ribs.

The concept of going to Alex's during daylight didn't seem as bizarre to me as it will to some people, since a I have a couple of fellow gearhead friends who live nearby and we occasionally swing by for burgers when we work up a hunger wrenching on old cars. If you are unfamiliar with the place's phenomenal Greek burgers, which get a generous dose of Greek seasoning before being cooked in a cast iron skillet, Seth over at the Best Memphis Burger blog does a great job describing them.

I had been up late Friday night working on rebuilding my '55 Ford with the above-mentioned friends so when I rolled out of bed Saturday afternoon I decided that I'd go ahead and try the ribs from Alex's for a mid-day first meal. As I was arriving I got a call from another friend in the neighborhood who was wanting to grab lunch and a beer who ended up joining me. Other than the bartender we were the only two people in the place, which is every bit as dimly lit at noon as it is at 3 a.m. 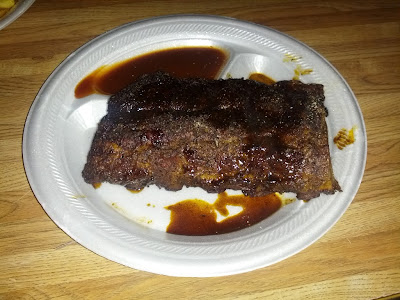 I was glad I ended up having a friend join me when the bartender told me that it would be 30 or 40 minutes before my ribs were ready. That news also reassured me that there was zero risk I was getting ribs reheated in a microwave.  He said he was out of beans and slaw but he offered us an order of his tasty Greek-seasoned fries instead. The owner, Rocky, is a Greek who believes every food is better with Greek seasoning. When I asked if the beans and slaw also have Greek seasoning when they are available I was told, "Everything here is seasoned with it. If you sit still long enough we're liable to sprinkle some on you."

When the ribs arrived they were outstandingly smoky, tender and delicious. The rumors were true; they really are some of the best ribs in the Memphis area. They were served the way I prefer -- dry rubbed with sauce on the side.They had a nice spicy kick and, unsurprisingly, a generous dusting of Greek seasoning. The seasoning is already famous for how well it works with Memphis-style ribs thanks to the Rendezvous restaurant Downtown, where owner Charles Vergos created a local institution with his Greek rendition of Memphis ribs.

When I asked what the secret to the ribs is the bartender chuckled and said, "We don't really do anything to them. That's why they are so good. It's just salt, pepper, Greek seasoning and eight hours of slow smoking before I hit them with my Greek barbecue sauce, wrap them in foil and smoke them some more. While they are cooking I spray them with apple juice."

In my post about creating my own barbecue on a $40 Brinkman smoker I mentioned that with proper technique and attention to detail a cheap smoker can make barbecue as good as any high-dollar commercial rig. Rocky has absolutely proven that. 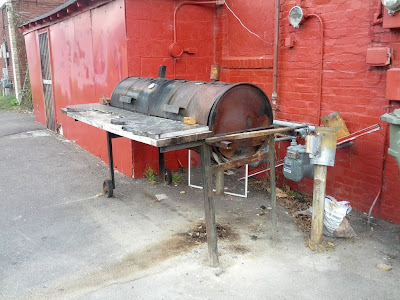 This is where some of the best ribs in Memphis get created; an aging barrel smoker behind a Midtown dive bar. For great barbecue, knowledge and technique are worth more than expensive equipment.

I had heard that the ribs at Alex's were a Saturday special but Rocky said they have been enough of a hit that he tries to keep them around now. He smokes them several times a week as needed, but I'd still call before heading over to make sure they are available. The number is 901-278-9086. During my visit he said he was down to his last slab. Of course, if you ever show up and hear that some of the best ribs in town aren't available at the moment you still have the option of ordering one of the best burgers in town. Or some of the best wings in town. Rocky keeps the menu short, but that's because he doesn't put anything on it that he hasn't completely mastered.