Real Pit Barbecue from a Hotel Restaurant - The Rib Zone

As a lifelong Memphian I already had multiple restaurants I could count on for good barbecue before I ever started my current quest back in September of 2011. The point of trying as many Mid-South barbecue joints as possible was to add some entertainment to my work routine by exploring my part of the country a little further while finding out what was going on in all the restaurants I used to just drive past. 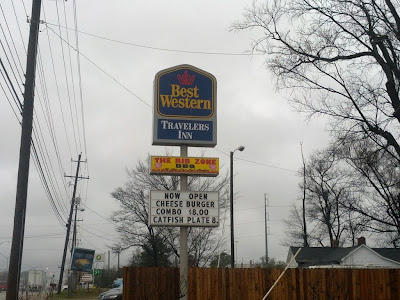 If I wasn't on this quest then the Rib Zone BBQ on Lamar just south of Shelby Drive is somewhere I would probably never have tried, which would have meant missing out on a surprisingly pleasant experience. When I think about good barbecue a buffet place located inside a Best Western in a heavily industrial part of the city dominated by truck stops and a giant railroad switchyard definitely isn't the first thing I think about. 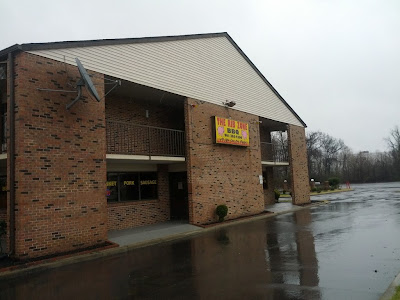 Before the Rib Zone opened there was another barbecue restaurant inside the hotel that I didn't get a chance to try before it closed. The Rib Zone sign went up several months ago but it didn't open until a few weeks ago.

While the Rib Zone has a buffet they also have a menu you can order from, which is what I did when I stopped in last Thursday. All the food on the buffet looked inviting but owner Dennis Watkins told me he had an $8 rib dinner special that day. The full buffet was $14.95 and I correctly assumed that the rib dinner was going to be plenty of food.

Since I'd noticed that the greens on the buffet looked particularly good I asked Watkins what kind of slaw he served. When he told me "creamy and sweet" I opted to pass on it and get greens and baked beans as my two sides instead.

Watkins told me he used to have a barbecue restaurant in Helena, AR, before he decided to move into the Memphis market. He had blues music playing in the kitchen that he was whistling along to while he worked. The music contributed nicely to the atmosphere, especially since it was being primarily played for the kitchen instead of the dining room.  It seemed completely natural instead of feeling calculated the way music selections at restaurants sometimes do. 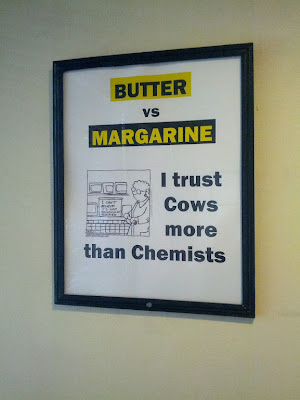 I also enjoyed seeing this sign on the wall that told me Watkins shared some of my philosophies on eating real food. 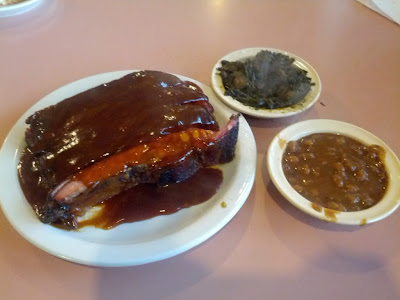 I'd ordered my ribs with the hot barbecue sauce that I forgot to request the on the side. It ended up being tasty enough that I didn't mind the liberal quantity of it on my ribs. I was surprised by how pink they were and how much smoke I could taste in them. When I mentioned that and asked about how they were cooked Watkins told me the restaurant had a barbecue pit built into it, which wasn't something I expected from a place inside a hotel.

The ribs were cheap spare ribs like the ones used at the somewhat nearby Tom's Bar-B-Q. For an $8 rib dinner using a cheap cut isn't surprising, but Watkins obviously knows how to make the most of them. They were better than the ones I'd had at Tom's. In fact they were some of the best spare ribs I've had. I usually get a little nervous when I see a restaurant is using spare ribs since all the fat and connective tissue on them can easily turn them into a tough, unappetizing mess in the wrong hands. But the cheaper cut can be gold in the hands of someone like Watkins who is able to render all that fat into delicious liquid.

The greens and baked beans were also solidly good. I hope other people don't dismiss the restaurant based on its location in a hotel. If it can draw even a small fraction of the lunch crowd Tom's is able to get from the surrounding industrial area it should be successful. And it's location near the border with Olive Branch, MS, could make it a great carryout option for commuters headed that way at the end of the day as long as they don't mind the simple U-turns necessary to get in and out of the place while headed from Memphis towards Mississippi.

Watkins asked about other barbecue places I'd tried in the area. Since I'd already eaten enough food to know I'd be posting a positive review and he was showing genuine, friendly interest in my opinions I told him about my blog. I talked about some of the barbecue highlights I'd found in the southeastern part of Shelby County like the impressive efficiency at Tom's, the great dry rub ribs at Leonard's, the outstanding sauce at Arnold's and the barbecue stew at Showboat.

When I mentioned how much I enjoy Showboat's barbecue stew Watkins disappeared into the kitchen and came back with a small, frozen plastic to-go container. "This is the soup I make with my barbecue," he said. "Take this home and try it." 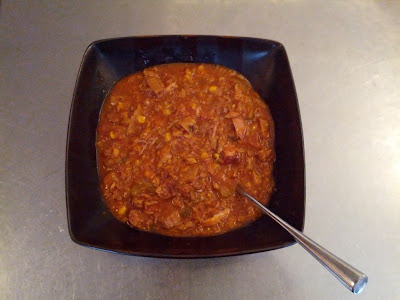 Sending me home with frozen samples of additional delicious food never hurts when I'm forming my opinion of your restaurant.

It ended up being enough soup for one good-sized bowl, which is what I had for lunch Saturday. It had a mix of barbecue, tomatoes, celery, peppers and corn in a thick, peppery sauce. Apparently it isn't always available but I'll be checking to see if it is on future visits since it was the very definition of soul-satisfying comfort food.