Black-eyed peas and greens are a New Years Day tradition here in the South. They are also a regular part of my diet anyway, so while I was working in Whitehaven on New Years Eve I stopped in at the China Inn International Buffet on Elvis Presley Boulevard to get some. Don't worry, I still had some homemade peas and greens at a friend's house the next day to help me avoid any potential bad luck this year. 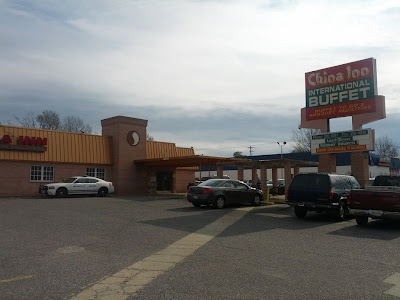 I had never been to China Inn before, so why stop there when I was craving Southern food? Because the China Inn 2 on Covington Pike has become a regular lunch spot for me since I discovered how unexpectedly good the selection of Southern cooking there is. In fact, when I visit I normally completely ignore the Chinese food section and just load up a plate of Southern soul food staples. 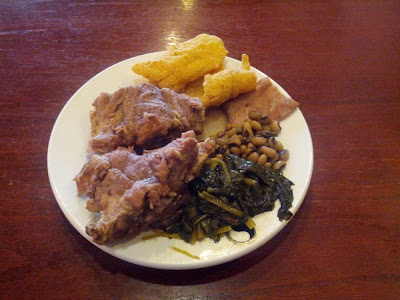 The Whitehaven location is a little smaller, with a more pleasant atmosphere, than cavernous Raleigh location. While the buffet is also smaller smaller than the giant one in Raleigh it still has an abundant selection of food to choose from. And both restaurants maintain a steady flow of customers that keeps the food fresh.

I got a plate of pork neckbones, hog maw, fried catfish, peas and greens. Everything was as good as I'd expected it to be based on my experiences at the Raleigh location. For anyone who is unfamiliar with hog maw, it is made from the lining of a pig's stomach and is common in both American soul food and traditional Chinese cooking. It tastes okay but it isn't as tender and flavorful as well-prepared chitterlings, which are made from pig intestines. The hog maw certainly wasn't as good as the neckbones, which I have learned to load my plate down with at either China Inn since they never disappoint.

Heavy use of pork as both a main dish and a seasoning for vegetable-based dishes is so common in traditional Chinese cooking that it isn't as surprising as it initially seems that the China Inn kitchen is so proficient with soul food. Especially since both traditional cooking styles are so centered around avoiding waste, which means that every part of the pig ultimately ends up on the table. Keep that in mind any time you hear vegetarians and vegans referencing the completely-discredited China Study as evidence that animal fats and proteins are unhealthy.