Wednesday was this blog's one year anniversary. I haven't posted much in the past two weeks even though I've still been enjoying barbecue and soul food pretty much every weekday. I've found so many great places doing this blog that I now know where to stop for a cheap, tasty and nourishing lunch in pretty much any part of the Mid-south I end up in. The problem for this blog is that over the course of more than 170 posts over the past year I am finally starting to run out of new places to write about. 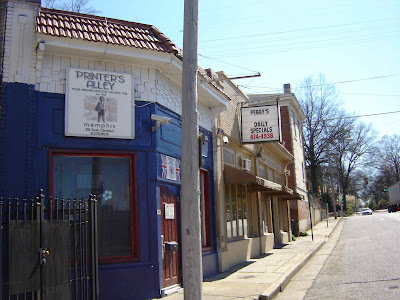 On Thursday I was able to stop by Peggy's Heavenly Home Cooking on Cleveland a few blocks south of Union in the Medical District. It is directly next door to Printer's Alley; a late-night bar that is an institution among locals who like to drink well into the a.m. hours. I've had several people recommend the Southern hospitality and vegetables at Peggy's to me over the years but I am rarely that close to home on workdays and somehow I never think about the place on Sundays, when it is also open. That will change now that I've been there, since open restaurants around Midtown can be surprisingly hard to find on Sunday evenings. 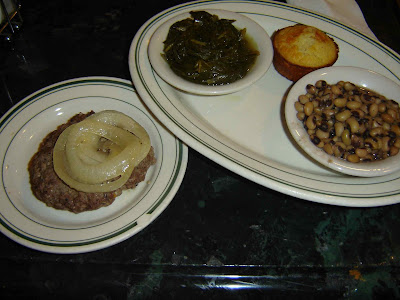 I ordered the chopped steak with onions and sides of turnip greens and black-eyed peas from my extremely warm and welcoming server. My meal came out fast. Being in the Medical District the restaurant seems to make sure it gets food out quick enough to get busy medical workers back to work on time. Everything was well-seasoned, but in a more subtle way than Southern Hands, which has become my gold standard for greens and black-eyed peas. At Peggy's the seasoning in the chopped steak stood out as particularly good and the greens just needed a splash of the obligatory hot pepper sauce that was already on the table. The peas did seem a little underseasoned although a little black pepper corrected that.

Like At The Bistro near the airport, Peggy's prides itself in serving "healthy soul food." And like At the Bistro, "healthy" at Peggy's means vegetables cooked without animal fat on a menu full of starch-heavy sides, sugary drinks and sugary desserts. That was no big deal to me. I was still able to put together a thoroughly tasty and nutritious meal. Peggy's and At The Bistro are both owned by women with a thorough understanding of how seasoning works, so both restaurants are able to create delicious Southern vegetables without any animal fat. But it is always disappointing to see just how ingrained misinformation peddled by the the government and the processed food industry has become in society's mindset.

Ironically, I'm sure that the meat-free vegetables are extra popular at a restaurant that draws a lot of its customers from the Medical District, since groupthink and confirmation bias have caused medical professionals to stubbornly cling to the hypotheses that high fat diets and high blood cholesterol levels increase the risk of heart disease despite overwhelming evidence to the contrary.

In fact, New York Mayor Michael Bloomberg recently began encouraging hospitals in the city to cut fats from the foods they serve and push more whole grains, and hospitals are voluntarily accepting his recommendations. One of the main reasons I said I was so opposed to Bloomberg's prior vendetta against big gulp sodas; despite the fact that sugary drinks are such a major driving force behind obesity, heart disease and diabetes; is that the government has such a long history of giving terrible dietary advice. An epidemic of high blood sugar levels is the driving force behind our country's increasing epidemic of chronic diseases. And a low-fat, whole-grain-heavy diet is one of the last things anyone with high blood sugar needs. When I compared the effects on blood sugar of a low-fat meal full of whole grains to just eating a jumbo barbecue sandwich from Payne's a few months ago I ended up being amazed by how much worse the supposedly "healthy" meal ended up being.


If you genuinely believe some invisible being like Allah or Yahweh is going to get mad at you for eating pork in your vegetables that is one thing. But if you think science has useful things to tell us about how the world works then take another look at pork fat and accept it for the nutritious and nonfattening energy source that it is. It's status as a real food that we is why making it a cornerstone of my diet has dramatically improved my heart health. And vegetables like greens are loaded with fat-soluble vitamins that are bodies don't absorb correctly if we don't eat them with enough fat.

Interestingly, since I mentioned how much I love the greens at the Southern Hands, I found out that the fear of pork fat amongst the general public also influenced the recipe for greens there. I stopped by the Collierville location on Wednesday, like I now do pretty much any time I am in Collierville, and while I was there I asked one of the owners if she uses salt pork or ham hocks in her greens since they are so consistently good. I was shocked when she told me neither. Since we live in a society where the words "salt pork" make people cower with fear she cooks the greens with a combination of smoked turkey and rendered chicken fat from her baked chicken. The results are great, but she did say she still personally prefers pork.

It demonstrates how little common sense people are applying to nutrition when customers are more comfortable with rendered fat from a chicken than a pig. Yes chickens are leaner overall than pigs. But even if you believe the myth that animal fat is bad for you, rendered fat by definition is pure fat no matter what animal it comes from. Besides, pigs don't get fat eating fat. You make a pig fat with corn, soy beans and skim milk.

On a side note, the reason I was in the Midtown area at lunchtime was because I took off work early to take care of getting tags for my Mustang. People who live in Memphis understand why I set aside an entire afternoon for that ordeal. The several hours process it takes to go through inspection and then to the County Clerk's office for tags strikes fear into the heart of any Memphian. Residents have to go through an inspection for any vehicle more than four years old.

Comically, the '69 Mustang was built before there were any government emissions standards so it is exempt from having to meet them but the city still requires a paper from one of its inspection stations for any license renewal. Normally that paper has to say the vehicle passed every part of the inspection. But for an old car like the Mustang you can totally fail the tailpipe test for hydrocarbons and then use the paper saying you failed to get tags as long as you pass all the safety parts of the inspection for things like lights, parking brake and wipers.

Despite the hydrocarbons, don't get onto me for polluting. The car is a secondary vehicle that doesn't see a lot of road time. And fixing up an old car is recycling. The impact on the environment isn't anywhere near as bad as the energy and resources that go into creating a new car, even if it's a Prius.