I heard about the recently-opened Wing & BBQ Shack on Mendenhall near Winchester from a friend who is a major barbecue connoisseur who devotes a lot of his spare time to both judging and competing in area barbecue contests. He told me that the the owner was a transplanted Texan and that while the restaurant's pork ribs didn't do anything to impress him the place had an incredible chopped brisket sandwich. 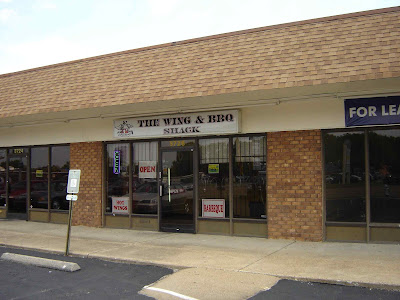 The restaurant is tucked away in a strip shopping center in Fox Meadows and is pretty easy to miss. I drove past it the first time I tried to spot it and had to call my friend to get a specific fix on the location. It is directly across the street from the big bowling alley just south of Winchester. Once I went inside I told the lady at the counter that I'd heard great things about the brisket sandwich. She told me it was available with a $5 lunch special that included a side so I got one with a serving of baked beans. She also asked if I wanted the sauce and slaw on the sandwich or served on the side. I appreciated being offered the choice and opted for both on the side. 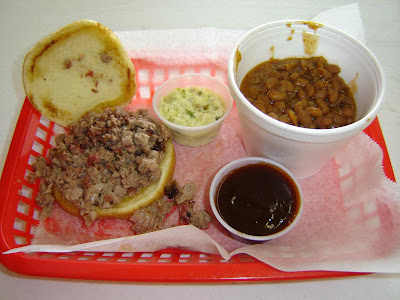 The tender, juicy, smoke-infused brisket meat was as good as I'd heard. I ended up bypassing the bun and just eating it with a fork. I was glad I got the mustardy slaw on the side since it let me really appreciate how good it was. It can be hard to really get a handle on how good slaw is when it is a component of a sandwich. The sauce had a nice little kick to it. The beans were great. Sticking to the place's Texas roots they were packed with beef and hearty enough to serve as a meal by themselves.  On my way out I told the lady at the counter how good everything was and that I definitely wished I'd had more of the meat. She said I could have had a jumbo sandwich for just $1 more. That is definitely what I'll do during future visits, which I'll definitely be making since, as much as I love Memphis-style pork, it is nice to enjoy some variety.

The Wing & BBQ Shack should really do more to promote itself as serving up Texas-style sandwiches here in Memphis. The place is right around the corner from the Winchester Tops location, which is my default for quick, cheap pulled pork in that immediate area. But while Tops recently added brisket to the menu, the chain offers a fairly underwhelming rendition of it. Memphis will always be pork city when it comes to barbecue but that also means there are already an abundance of places offering great pulled pork and pork ribs. Besides Tops, the Wing & BBQ Shack is also a short distant from Leonard's, Showboat and the Mt. Moriah Neely's. Chopped beef brisket is delicious when done right and the Wing & BBQ Shack does it right. Combine it with the place's beefy beans and you have a Texas combo that I'm sure other locals will appreciate for a change of pace.