Out of all the places I've visited for this blog, my two posts about Pollard's in Whitehaven have generated the most interest from reader's by a wide margin. That is 100 percent due to the restaurant's appearance on the Food Network television program Restaurant Impossible. But while I posted about the place both before and after its TV makeover, both of those posts just talked about the restaurant's ribs.

That was partially due to my rules for healthy eating on this quest, which cause me to largely avoid wheat and foods cooked in vegetable oils. I was at a wedding recently where a friend's mom told me she has effortlessly dropped 25 pounds on my "barbecue and soul food diet" and feels great. It is nice to hear confirmation that I'm not just ranting at the air around me with this blog, and that the information I'm sharing here is genuinely helping people. For anyone who needs a refresher; I try to limit total carbs to 100 grams a day or less with as little of that as possible from wheat, sugar and high fructose corn syrup. I avoid refined vegetable oils as much as possible and try to get most of my calories from natural fats from animals, coconut oil and olive oil. Other than that I don't count calories at all and simply eat until I'm full when I get hungry. These guidelines have kept me at a healthy weight and improved my cholesterol ratio while I've generally been eating pork at least a couple times a day.

But most people aren't following my guidelines and last Monday I was driving past Pollard's at lunchtime when I realized I had never tried the meal that represents what most people would probably order when stopping by for a quick, affordable lunch -- a barbecue sandwich with baked beans and fries. 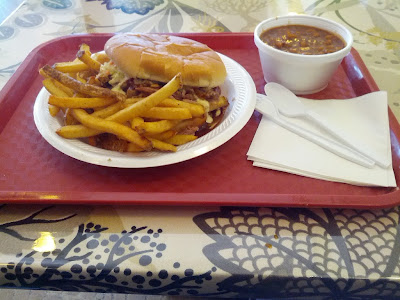 I wanted to try the fries since one of the pointers Pollard got from Restaurant Impossible was to save money and improve quality by making his fries from scratch with fresh potatoes. The results are great, with tasty skin on them to attest to their minimal processing. The sandwich was on a perfectly toasted bun, but I still ended up just eating the meat and slaw with a fork and bypassing the bread. It was a solid example of a pulled pork sandwich with a generous helping of tender meat that I wouldn't hesitate to order again. I requested the spicy sauce again on this visit and this time it had more of a satisfying kick to it. There was also less of it than on the order of ribs I'd tried so it ended up being a nice compliment to the sandwich. The regular sandwich combo just came with fries, but I already knew how good the made-from-scratch beans were so I paid extra for an additional side order of them. 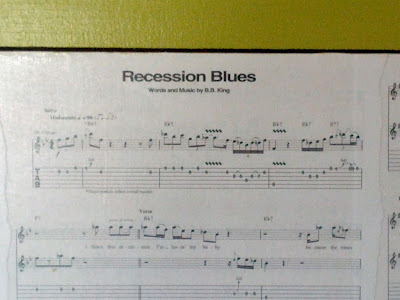 In my post about my previous visit I mentioned that some of the POLLARD'S letters that the Restaurant Impossible people had mounted on the wall were falling down. They were all back up this time around and the restaurant looked clean and tidy. Of the sheet music the TV crew used to decorate the walls I ended up in a booth next to the words and music for the "Recession Blues" by B.B. King, which seemed highly appropriate for a Memphis restaurant struggling to make it in the current economy. In all of my visits to Pollard's all the people I have encountered working there have been nice enough to keep me hoping that they make it.
Posted by Memphis Que at 4:11 PM