After the TV Makeover - Return to Pollard's

The first time I tried Pollard's Bar-B-Q was the day the restaurant opened at its current location on Elvis Presley Boulevard. That day, September 26, 2011, was also the day that I created this blog. The week before that I'd made the random decision, while stopping for lunch at work, to attempt to try every barbecue joint in the Memphis area. After several days of posting about my barbecue quest on Facebook I decided to create a blog about it. That way I could go into more detail using food as a jumping-off point to discuss other issues that are important to the city I love.

This is my 128th post since that day and I'm still nowhere close to running out of barbecue and soul food restaurants to try. While I was off sampling barbecue throughout the Mid-south, Pollard's was losing money as it failed to attract enough customers to pay the bills in the crowded and fiercely competitive local barbecue scene. The failing restaurant ended up being featured on the Food Network TV show Restaurant Impossible in an episode that aired last Wednesday. The premise of the show is that celebrity chef Robert Irvine visits restaurants that are on the verge of going under and spends two days and $10,000 trying to turn things around. 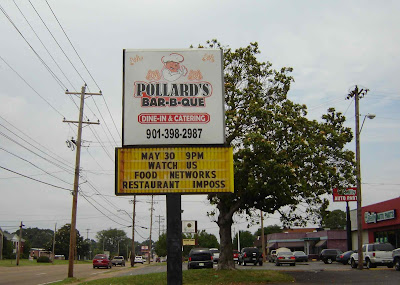 When I stopped by on Monday there was still a sign in front of the restaurant announcing its recent TV appearance. If you look down the street to the left you can see a small white billboard on the other side of the road. It's a sign for a Krystal's fast food place. Underneath that is the sign for Marlowe's Ribs, which is so close to Pollard's you can see it from the parking lot. You need a serious plan to open a barbecue joint in a market as saturated as Memphis. 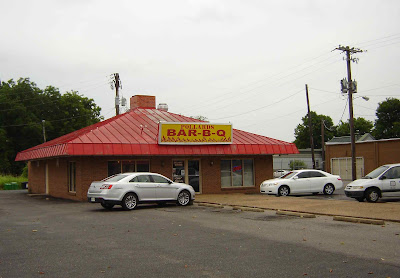 During my first visit to Pollard's the spartan interior didn't bother me. I've eaten plenty of great barbecue at places that will never win any design awards. The ribs didn't blow me away on that visit, but they weren't as terrible as the TV show made them out to be either. The show made them sound extremely tough but on my visit they'd been absolutely falling apart. In fact, in my initial post about the place I voiced my suspicion that the ribs had been boiled before cooking as a shortcut since they were so tender while the meat lacked any actual smoke flavor.

Boiling was never mentioned on the TV show, but a lot of local viewers were shocked when they heard owner Tarrance Pollard say he uses a barbecue technique that only requires his ribs to spend one hour smoking in the pit. That reinforces my suspicion that the ribs I ate had been boiled, since there is no way you can start with completely raw ribs, cook them through in just one hour, and end up with anything other than shoe leather.

Another major criticism the show lobbed at the restaurant was the sauce, which Pollard made by doctoring up a store-bought barbecue sauce. There is nothing inherently wrong with starting with a store-bought base sauce. Plenty of excellent sauces start life as plain old Kraft or Cattleman Jack's barbecue sauce. But most places that doctor store-bought sauces aren't just adding a few additional ingredients like ketchup, vinegar and water (!?!). They are adding a blend of spices and seasonings while smoking and simmering the sauce. I thought the sauce was too sweet on my first visit, but to me the bigger problem was the quantity of it. With great ribs the flavor is infused into the meat itself. A little sauce can add a nice compliment to the flavor profile, but there shouldn't be a river of it trying to create flavor where there isn't any. 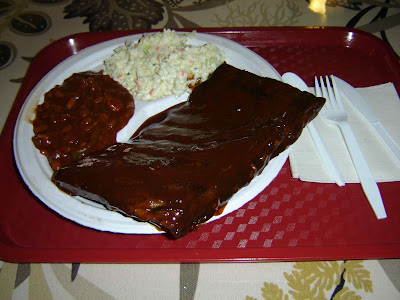 On my second visit I once again ordered a rib plate with beans and slaw. The sign said a half-slab of ribs was $13.50, but my total came out to over $16. Apparently they don't offer a rib plate, so you have to add beans and slaw a la carte at $2 each. I immediately noticed two things when my order came out, one positive and one negative. The ribs were still being smothered in sauce. But the beans were obviously real baked beans, meaning Pollard had listened to Irvine's advice that he could save money and improve the quality of his food at the same time by making his beans from scratch. I've been served canned baked beans so many times on my quest that I immediately give extra credit to any restaurant that takes the time to make the real thing. The best thing Pollard's got out of being on Restaurant Impossible was a condensed menu with a focus on making things from scratch.

The slaw was creamier than I prefer but pretty average compared to other places around town. The ribs were tender, but there was still no evidence of smoke in the meat. The pit was going when I pulled up, with smoke pouring out of its chimney. And the smell of wood smoke in the restaurant made my mouth water. But it wasn't getting into the meat. It made me think that the restaurant still hasn't abandoned its infamous one-hour ribs. 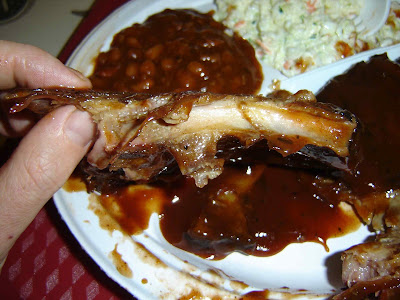 Pork may be "the other white meat," but it should take on a pink color when it absorbs smoke from wood and charcoal. I didn't see or taste it in the ribs at Pollard's.

I asked for spicy sauce on my ribs when I heard I had the option of mild, medium or spicy. The supposedly spicy sauce didn't have any heat to it but it wasn't bad. I still thought it was too sweet, but that was partly because there was so much of it. To make matters worse there are no napkins or paper towels at any of the tables at Pollard's. You get a little stack of napkins with your order but that's it. When you're serving up ribs this sloppy a total lack of napkins at the table is more than a minor annoyance.

Pollard's needed to make some changes but it was obvious watching the episode of Restaurant Impossible that the show's main priority was filling an hour of cable television and getting out of town, not positioning the restaurant for longterm viability. Like all "reality" shows a lot of time was wasted intentionally creating needless tension so the episode could have some drama. Irvine showed up, said "your barbecue sucks," and and then put on a big show of righteous indignation when the owner of the place didn't immediately embrace an outsider's complete dismissal of both his career and his self-identity.

To make matters worse, when Irvine tried to show Pollard the "right way" to season ribs he did it with an Asian-inspired recipe full of ginger and soy sauce. Pollard's is in Whitehaven. To be successful it needs to serve barbecue that people in Whitehaven want to eat, not something that would be seen as an interesting take on barbecue to serve in Atlantic City.

Barely a mile north of Pollard's on Elvis Presley Boulevard there is a barbecue joint called Big Bill that feeds a steady stream of customers. Big Bill doesn't advertise. You can't even find them on Google Maps (if you want to find it look up the Lenny's Sub Shop on Elvis Presley next door). It's a spartan-looking place in the corner of a strip mall. If Pollard is serious about improving his business he needs to visit local places like Big Bill that depend on repeat business from word-of-mouth customers to see what they are doing differently.

Other than locals the main potential source of customers for Pollard's restaurant is tourists visiting Graceland, which is less than two miles up the street. So he should also head a few interstate exits over to Leonard's Pit Barbecue to try some ribs so good they don't need any sauce from the place Elvis himself would rent out when he wanted to treat his friends to some barbecue. Irvine showed Pollard one random recipe for a sauce and rub and told him that was how he should prepare his barbecue. One of the most wonderful things about eating barbecue is that there isn't a single right way to do it. Anyone who makes truly great barbecue has sampled a lot of it with an open mind towards improving their own. 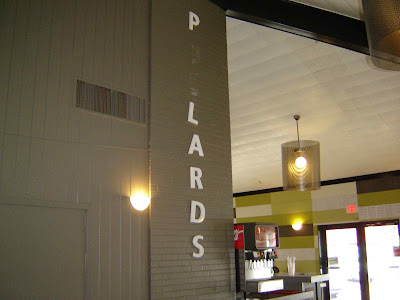 Another annoying area of intentionally created conflict on the TV show was the self-imposed two-day deadline to completely renovate the entire restaurant. Why are you trying to redo the wiring while customers are lining up outside? Because you assume your viewers are easily-distracted imbeciles. I usually avoid the inanity of reality television. But as someone who rebuilds classic cars I would sometimes get sucked into watching segments of the old cable program Overhaulin, where a crew would "steal" a person's project car and completely redo it in one hectic week. The resulting atrocity always featured elaborately garish paint and billet wheels. Meanwhile according to magazine reports, plenty of the cars would barely run since no one had time to tune the hastily installed crate motors thrown into most of them. If one of my project cars had been subjected to that show I would have hunted the so-called "friend" who set me up for it to the ends of the earth to exact my revenge.

The point of Overhaulin wasn't to create a reliable car that reflected the owner's tastes. You don't expect a lot of attention to detail from any project that intentionally uses an unrealistically tight deadline to create the drama of stressed out people thrashing to finish something that just needs to look flashy for a few minutes of television. When I was watching Restaurant Impossible I wondered how durable a lot of the hasty renovations were going to be. There are plenty of reality shows ostensibly created to help the people who appear on them. The missing and askew letters where the Restaurant Impossible crew placed the Pollard's name on one of the restaurant's walls seemed like the perfect symbol for the still-struggling people who are inevitably left behind when the cameras stop rolling and the audience changes channels.

[EDIT TO ADD: during a later follow up visit to sample the pulled pork sandwich all the letters were back up and the place looked clean and tidy. Read about it here.]