I recently spotted Dindie's Soul Food on a familiar stretch of Stage Road between Coleman and Austin Peay in Raleigh. I lived in Raleigh up until I was a teenager. The restaurant sits across the the street from the old Raleigh Skateland, which is apparently called the Raleigh Skate Center these days. And it is just a few buildings down from the Living Word Fellowship Church, which was called Living Word Lutheran Church when I went to Cub Scout and Boy Scout meetings there as a youth.

Given my fond memories of the area I was very happy when Dindie's ended up being a great place to eat. 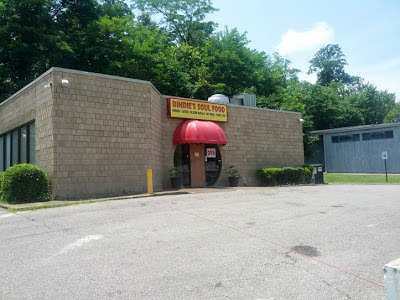 The exterior of the building is pretty drab. I think I remember it being a Chinese restaurant when I was a kid. 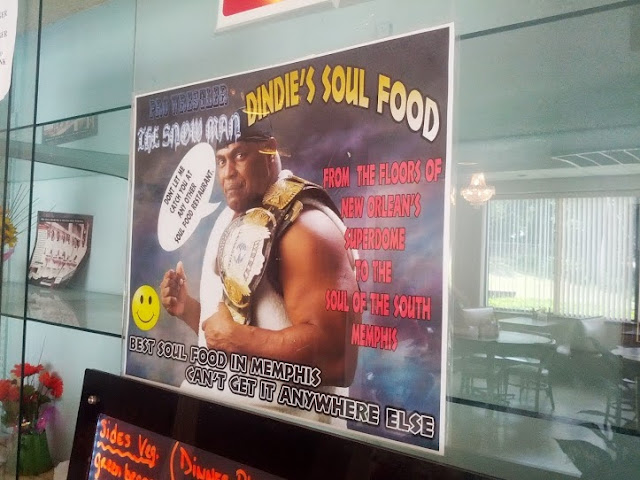 Inside the restaurant is clean and inviting. As I was welcomed in by the friendly owner I noticed that Dindie's also has the honor of being the only soul food restaurant I know of in the city that is endorsed by a professional wrestler -- Eddie "Snowman" Crawford. 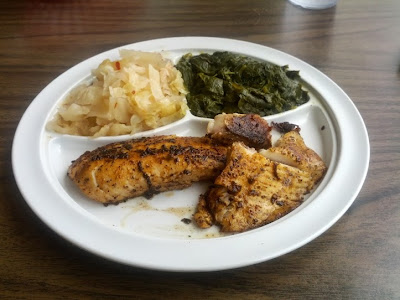 After looking over the menu and reading the day's specials I ended up ordering the grilled tilapia with greens and cabbage. It was July 5 and working in the heat the day after the excesses of July 4 left me wanting a relatively light lunch. I loved the seasoning on everything. I never touched the salt, pepper or any of the hot sauces on my table. And the fish was perfectly grilled with plenty of moisture in the fillets.

When I asked the owner he said the restaurant had been open for nearly a year, but a lot of people seemed to just now be noticing it. Given the freshness and quality of the food I expect his business to grow as people who notice and stop in become regular customers and tell their friends.

UPDATE: I stopped back by Dindie's a couple weeks after this post and ended up trying the meatloaf, once again ordering greens and cabbage since they were so good on my first visit. The sides were as good as I remember and the meatloaf was nearly as good as the meatloaf at Southern Hands (the linked Collierville location is closed now but Southern Hands still has a Hickory Hill restaurant). At Dindie's the meatloaf was offered with either a tomato sauce or a brown gravy sauce. I went with the tomato since it sounded closest to the sauce I love at Southern Hands. With Dindie's proximity to Covington Pike, where I frequently work, and the food I've had so far I can tell it will be a regular stop for me in the future. 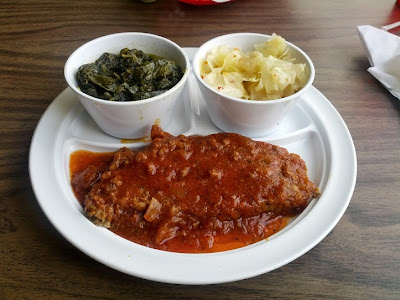