As most people in the Memphis area know, the section of Mt. Moriah just south of I-240 is lined with car dealerships. Being in the automotive parts business, I spend a fair amount of time there.

Friday was my birthday and I was stuck in the unfortunate position of working on Mt. Moriah while the temperature was 104 degrees. I'd had a friend offer to take me out to lunch, but I was wanting to hurry up and get done with my work day, get home to my air conditioned house, shower and have a beer while waiting for the 8 p.m. dinner reservation my wife had made for us at the always-wonderful Andrew Michael Italian Kitchen.

So I wanted somewhere I could grab a fast lunch. I remembered from my days on a lawn crew as a teenager that Picadilly Cafeterias tended to keep the air conditioning cranked up in the summer as well as being places you could get in and out of quickly. So on my birthday I ended up having lunch by myself at a Picadilly on Mt. Moriah directly behind the former location of Platinum Plus, a notoriously wild and raunchy strip club that was shut down by the FBI several years ago. But my humble lunch was all in the name of getting my weekend of fun started as soon as possible. And I'd forgotten just how decent of a spot Picadilly was for grabbing some fast, cheap, serviceable Southern grub. 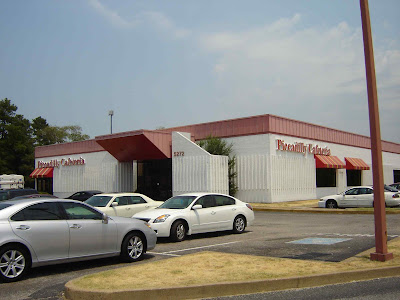 Picadilly is a chain with locations throughout the South. The cafeteria-style serving setup keeps the wait time to a minimum while the large, plain dining area avoids the type of kitsch-heavy pseudo-folksiness that can make a visit to a Cracker Barrel restaurant such a soul-sucking endeavor. Of course, Cracker Barrels tend to sit at Interstate exits because they are aimed at traveling tourists while Picadilly Cafeterias tend to be in neighborhoods.

Most of the soul food restaurants I visit serve food cafeteria style, so that didn't both me. I've read that Picadilly has had trouble attracting younger customers because they are put off by the idea of "cafeteria food" but I prefer it to the buffets that a lot of young people don't seem to mind. Cafeterias tend to have a smaller selection of foods that all actually go together with servers looking out to make sure everything is fresh. Buffets tend to be giant haphazard piles of mediocre-at-best unrelated foods with a heavy emphasis on cheap fillers like bread, pasta and potatoes. 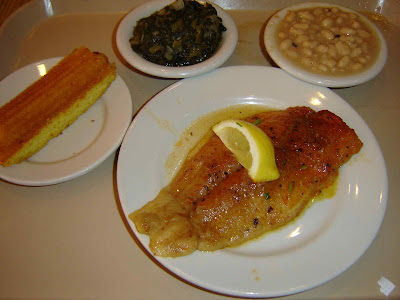 Does Picadilly count as a soul food place? I got crab-stuffed baked fish, white beans and turnip greens with a piece of corn bread for less than $10. I tried a few bites of the corn bread and it was good. The beans and greens weren't the kind of perfectly seasoned examples you can find at smaller independent places with one or two people doing all the cooking with no written recipes. The beans needed salt and pepper and the greens needed hot pepper vinegar sauce but both were perfectly serviceable. The fish was good, although I'm a little put off by anywhere that serves me "fish" with no further details about what species I am being served or where it came from. Still, everything was good enough, cheap enough and fast enough to remind me why the chain was an old lawn crew lunch stop.

I'd probably classify Picadilly as more country cooking than true soul food, mainly due to the lack of different pig parts. The pork selections were all some variation of pork chops. The beef selections were mostly steak and roast beef, although I did see liver and onions as an option. Interestingly, later that night at Andrew Michael I had a lamb neckbone as part of a $30 entree. A lot of old lines are getting blurred in the restaurant world as many lower-priced restaurants try to avoid offending picky eaters accustomed to hyper-palatable, ultra-processed foods while fine dining establishments constantly seek out different interesting takes on real foods for increasingly adventurous serious food lovers.

That isn't to say that real food can't be cheap as well as delicious. But watch a poor 70-year-old and a poor 20-year-old shop for food. What they are buying is probably completely different. And the 20-year-old probably won't make it to 70 without some serious changes in their diet.